Home » Fashion » The Evolution of the Cowboy Boot 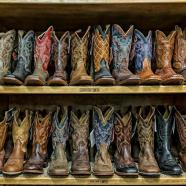 The Evolution of the Cowboy Boot

Once a mainstay for working cowboys and cowgirls, the cowboy boot evolved into its own niche in fashion. Elaborate stitching, exotic leathers, a variety of toes boxes and heel design and height, the cowboy boot today has come a long way from the utilitarian footwear of the the mid-1800’s.

Boot historians cannot definitively place a moment that the cowboy boot first made an appearance. However, some would argue that forms of the iconic footwear can be traced back to Ghengis Khan. Others point to the influx of European immigrants for introducing a taller version,  the Wellington and Hessian boot, of the modern cowboy boot to America.

By the mid-1800s,  bootmakers answered the need for utilitarian footwear for cowboys on cattle drives. “From 1865 to 1890, cowboys drove cattle from Texas to Kansas. They wore Wellingtons and variations,” Jennifer June, an Oakland, California custom boot maker  and a cowboy boot aficionado said. “The tall tops of the boots protected your legs; the underslung heels kept your feet in the stirrups.”

The cowboy boot’s original design elements were suited to the horseback rider, including the rounded or pointed toe that makes it easy to insert the foot into a stirrup and the slick sole that allows the boot to slip free when dismounting.

Fast forward to the early days of Hollywood and the growing popularity of the Western film. Movie cowboys such as Gene Autry, the Singing Cowboy, and western film giants Gregory Peck and John Wayne began wearing more colorful versions of the work boot.

Traditionally, the early boots were made from cowhide, today exotic leathers and hides and elaborate stitching and dyes are more the norm. Cowboys of yearyear would not recognize what their functional footwear has become.

Although many manufacturers now mass produce their brands, there is still a market for custom crafted boots. The custom boot makers have become sought after and some have reached celebrity status among the celebrities they fit.

The nephew of boot king M. L. Leddy is now royalty himself, and he runs a real family business: He does the cutting, his wife and daughter do the stitching, his son-in-law does bottoms, and his former daughter-in-law creates the prettiest inlays anywhere. Specializes in: Flowery tops, old-fashioned crimped vamps, zipper tops, sharp pointed toes. Prices start at: $625. Turnaround time: Three to four months. Has made boots for: Country singers Buck Owens, George Jones, and Johnny Bush; U.S. representative Charles Stenholm.

Their boot designs are part flash and part kitsch, so it’s no surprise that the showroom in which Nevena Christi and Marty Snortum greet their customers—by appointment only—resembles Pee-wee’s Playhouse. Specializes in: The wildest tops in the business, from Hot Rod Devil and Custom Car Angel logos to fiery chiles and the Virgin of the Guadalupe. Prices start at: $750 (take $40 off any order if you trade a childhood cowboy photo). Turnaround time: Twelve weeks. Has made boots for: Actors Billy Bob Thornton, Mel Gibson, and Bruce Willis; actress Sharon Stone; director Steven Spielberg; talk-show host Oprah Winfrey.

Longtime boot collector Pedro Muñoz, Jr., made a killing off of the Urban Cowboy craze. Twenty years later, he still designs boots for sale via trunk shows and couture retailers such as Dolce & Gabbana and Christian Dior. Specializes in: Replicas of classic boots emphasizing starbursts and flame stitching, as well as buck stitching and lacing. Claims to be the only bootmaker using fossilized walrus and woolly mammoth ivory. Prices start at: $500. Turnaround time: Six to twelve weeks. Has made boots for: Rock singers Madonna, Robert Plant, and Bob Dylan; actress Ashley Judd; actor Tom Cruise.

Dave Wheeler has been working at his father’s shop since he was twelve; forty years later he continues the family tradition by working alongside his wife and his mother. Specializes in: Colorful, elaborately designed boots-as-art Prices start at: $825. Turnaround time: Eleven months. Has made boots for: Vice President Dick Cheney, actor Robert Duvall, defense attorney Dick DeGuerin.

Ignacio “Nacho” Martinez, another unsung elder, was part of the team that built boots for President Dwight D. Eisenhower for the dedication ceremony for Falcon Dam, in 1954. After spending most of his career at Raymondville’s now-defunct Rios Boots, he currently works out of his garage with his son, Joe. Specializes in: Flaming-red rose inlays, intricate braided-lace piping, and lizard scallops. Prices start at: $300. Turnaround time: Six to eight weeks. Has made boots for: Armstrongs, Klebergs, Yturrias, and other ranching elites.

Abraham Rios once had Raymondville’s biggest shop, serving area ranches like the King Ranch. Today his nephew Armando Duarte Rios puts his 45 years of experience into each and every boot. Specializes in: Fancy inlays and nimble stitching up to ten rows wide. Prices start at: $420. Turnaround time: Eight to ten weeks. Has made boots for: Former governor Mark White; former Speaker of the House Gib Lewis; actors Sean Penn and Peter Coyote; country singer Willie Nelson. 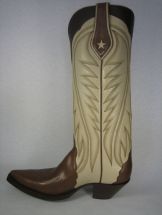