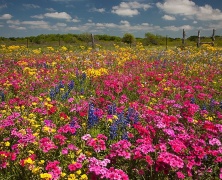 Ah, Spring is in the air. In Texas that means that Mother Nature begins to unfurl her canvas of rich color. Wildflowers. Along the roads and blanketing open fields, or even cultivated in lawns, the spectacular color range from the pale to the vivid. Former First Lady Bird Johnson and Golden Hollywood star Helen Hayes […]

The Story of John ‘RIP’ Ford

Born in South Carolina on May 26, 1815, John Salmon Ford grew up on a plantation in Lincoln County, Tennessee. He was studious and went on to study medicine. He moved to Texas in 1836 and joined the Texas army, serving until 1838. He left the army and practiced medicine in San Augustine, during this […]